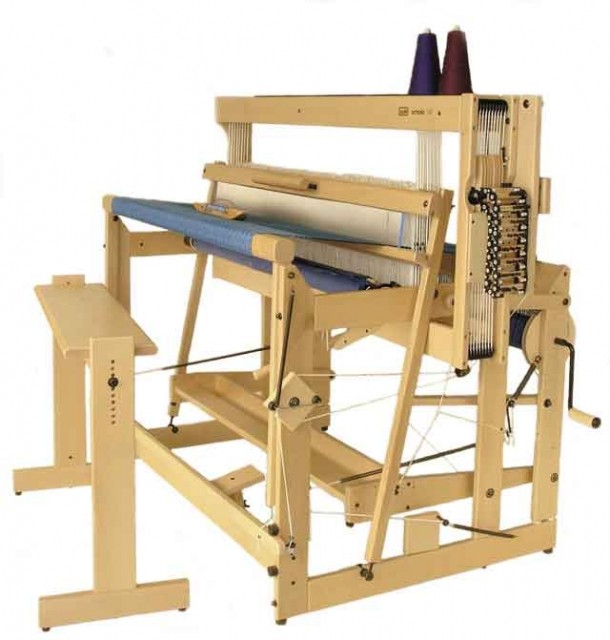 This eight-harness dobby loom is available in 110 cm (43 1/4"). The Octado is made out of lacquered beech hardwood and the most complex castle section is pre assembled. Included with the loom are a shelf and built-in raddle, a stainless steel reed 40-10 (metric), 1200 Texsolv heddles (330 mm), lease and tie-up sticks and sixteen warp sticks. You must choose between a mechanical and electronic dobby. Dimensions (wxdxh) 155 x 99 x 127 cm (61" x 39" x 50") Weight 53 kg (117 lb). A dobby loom has a dobby mechanism, which is used to program the harness combinations for the weave pattern. Dobby is short for "draw boy" which refers to the weaver?s helper who was used to control the warp thread by pulling on draw threads. The dobby mechanism replaces the treadle/lam combination of the traditional floor looms. The performance of a multi-harness loom is vastly improved by using a dobby mechanism, as it overcomes the major problems associated with the use of a large number of treadles. A dobby loom allows you to select the combination of harnesses for every shed opening you wish to make. The great advantage of a dobby loom is that it avoids the necessity and the labor involved in making multiple tie-ups to treadle positioned underneath a loom. An investment in a Louët Dobby ensures many years of comfortable and productive weaving. The mechanical dobby is a program bar with pegs system. The numbered holes in the program bars correspond with harnesses of the loom. If you want a harness to be raised, you place a peg in the corresponding hole of the program bar. Your series of program bars can be as long as you like; however, if the number of program bars becomes very large, you may want to consider an electronic dobby.